Over this past May and June, our Clubhouse members have been engaged in a four week program called ‘Game Design Unplugged’ that was delivered by our new Clubhouse Mentor, Sean and went through the fundamentals of game design. 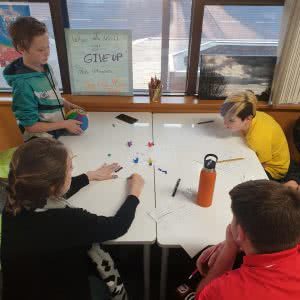 The first week was an experiential introduction to the importance of rules in determining the success and ease of playing a game. To do this, we were split into pairs to play a simple game that had a particular set of rules. Through this process we learnt how difficult games can be without clear rules, and how using confusing or undertested rules can disturb the balance of the game.

This was an interesting activity because even though we were all given the same set of rules, some of us interpreted them differently and this completely changed the dynamics of the game. Where a rule said that a ‘player can only move one space’, some of us assumed that it meant that a player could only move one space directly forward, while others assumed that the player could move one space in any direction. We also experimented with changing certain rules to see the impact small rule changes can have on the dynamics of the game. It was a great way to develop an understanding of the need to have explicit and clear rules within a game. 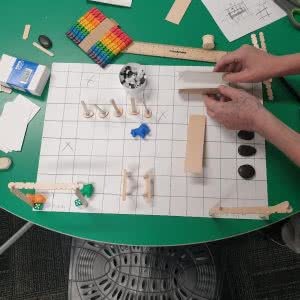 Next, we delved into an exploration of the basics of game design and the different types of games that are possible. Prior to this workshop we hadn’t considered all the background components that must be thought about in the process of designing a game. These processes included things like, the classification and whether it is a strategy game, a dexterity game, a puzzle game, a ‘pub’ game… etc., and whether you’re trying to create the game as cheaply as possibly to have a bigger return cost profit.

We were then asked to create a game that linked back to the theme of ‘Dog’. As a starting point to our game design, we had to write down everything that came to our mind when we thought about dogs. We then had to decide what type of game we would be creating. There was a huge selection of different resources that we could choose from to build up our games. Some of us decided to create a board game that simulated a dog show, whereas other groups designed a treasure hunt game with clues on ‘how to find the bone’.

Then came the most crucial part of the design process, playing the game. This stage is not about testing the whether the game is playable and successful but it’s about testing whether the game can be ‘broken’. An important part of this was having others play our games without them having any further instruction or clarification. This process allowed us to each offer and receive constructive feedback and offered us the chance to amend the game based on the feedback we received.  After making the adjustments required the play test stage repeated. 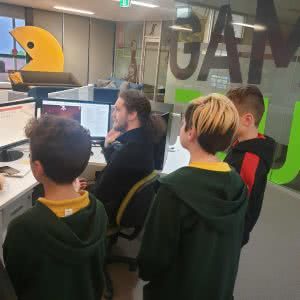 The ‘Game Design Unplugged’ program was a great learning opportunity and helped our Clubhouse members develop and conceptualise skills in creativity, ingenuity, problem solving, engineering, resilience, and communication – the basics of any STEAM related field.

As a celebration for the completion of the program, we visited Game Plus for us to participate in some career exposure through game development activities. Game Plus is a collaborative work space for game developers and related specialist technology start-ups to support the needs of small independent studios. Game Plus is a work space that has been custom built to enhance collaboration and innovation in the areas of games, education, mobile development, animation and film. 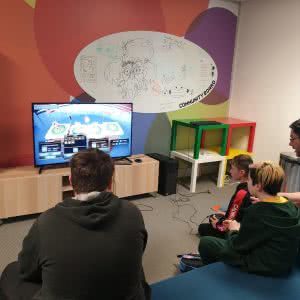 On this excursion, we were free to explore the space and observe the many independent game developers who were currently working on their games. This was an excellent opportunity for us to see the many aspects of game development, for instance illustrations and graphic design of characters, rigging a character with a skeleton and muscles, and seeing how levels are created. While we were at Game Plus, we play tested several games that were being developed, gave feedback, and were able to see the back-end problem solving that resulted from our feedback. This excursion was an excellent opportunity for us to learn more about careers in game development.

YWCA Canberra Clubhouse has developed a very good relationship with Jarrod who works across both AIE and Game Plus. This is the fourth collaboration that the Clubhouse has had with Jarrod and is a relationship that the Clubhouse values and will continue to foster into the future. Members left saying that they now realise how intricate and hard is it to create a video game, how dedicated people need to be, and feel much more appreciative of games.

YWCA Canberra Clubhouse is delighted to be welcoming Sean back for our upcoming Winter School Holiday Program to deliver this program again to teach and inspire more Clubhouse members!

Find out more about our upcoming school holiday program by visiting the School Holiday Program page.