What’s Your Reality’s Visit to the Legislative Assembly

What’s Your Reality’s Visit to the Legislative Assembly

On June 5, eight Clubhouse members, who were participants from the What’s Your Reality Program attended an excursion to the ACT Legislative Assembly by invitation from Nicole Lawder MLA for Brindabella. 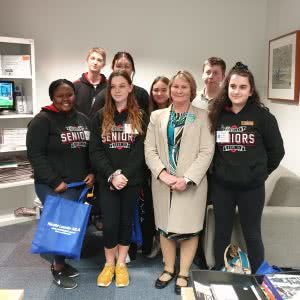 Nicole invited us to tour the Assembly and to hear her make a speech about the impact of our What’s Your Reality Program. What’s Your Reality was a project where ten Clubhouse members, who are also students from Calwell High School, volunteered their time to be ‘topic experts’ in producing nature-based virtual reality (VR) content for the disability sector. These young people were part of a team with the Clubhouse and ACT Parks and Conservation Service (PCS) to plan, film and produce nature-based VR experiences, in a pilot program providing footage for the New Horizon’s Parallel Parks platform. You can read more about this program and its impact in our recent blog post. Our Clubhouse members hear Nicole speak about the effect that the program had. Nicole spoke specifically about how the young viewers at the Muscular Dystrophy NSW camp really felt as though they were there with their newly made friends. This was because the VR content was unfiltered filming of our members just being themselves whilst enjoying the many experiences of Canberra’s National Parks, To have the program be commended so publicly by their local MLA showed our members that their effort created an important impact to the lives of others and that achievement was greatly valued by their community.

During the excursion, Clubhouse members met other MLAs and their staff. This was a great opportunity to learn more about the role of the ACT Legislative Assembly and the role of the people who form it, the Members of the ACT Legislative Assembly (MLAs). Clubhouse members were intrigued by learning of how MLAs are like school captains in that they are elected by the people in their community to represent the wants and needs of that community. Members asked MLAs about their Party’s opinions and reasoning on topics that were of interest to them. These were topics such as pill testing at music festivals, the new light rail system that was implemented in Canberra, and how the rising cost of living effects different demographics in Canberra. This excursion was incredibly meaningful for our Clubhouse members to learn about a career in politics including how the community is represented, and how laws are debated and created. By the end, one member shared how she was like an MLA as she was preparing to make a speech at her school assembly advocating for changes to the opening times of the school toilets.

Connecting with our local community is very important to us and one that members value greatly. Nicole continues to support the work of Clubhouse members are we are extremely grateful for this relationship.