On Thursday 22 March, we welcomed 80 young women from the ACT and Canberra region to the fourth She Leads College Conference, to uncover their inner trailblazer. 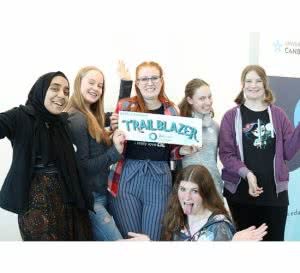 The day was opened with a rousing Welcome to Country from Ngunnawal Elder Aunty Violet Sheridan. Aunty Violet encouraged the attendees to imagine themselves as future leaders. Aunty Violet said that leadership can take many different, often non-traditional formats, and that this was an excellent thing, because the stronger women we have in every industry, the better.

The Conference was then officially opened by MC Codie Bell, who talked about her own leadership journey. Codie passionately discussed her won leadership journey, which was shaped by a violent relationship she experienced during university. Codie strongly advocates for justice for all victims of violence, and used her speech as a platform to discuss how attendees can make a difference.

In explaining how attendees can contribute to a safer world and healthier relationships, she said “what you pay attention to grows”, and encouraged attendees to focus on creating positive relationships and calling out negative ones. In her dedication to supporting victims of violence, Codie founded Restorative ANU, which is a movement of students and alumni campaigning for a holistic, victim-centred and empathetic response to campus violence. 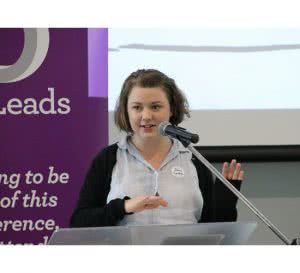 Through her advocacy for justice, Codie has found herself acting as a spokesperson for victims of violence, and uses her newfound platform to raise awareness of ongoing injustices in our society. She encouraged all attendees to “say something if you see something” and be the driving force behind an improved society.

Codie then introduced the students to their first workshop, where they were split into two groups to participate in either Making Positive Change, hosted by the YWCA Canberra Clubhouse Coordinator and Youth Engagement Officer, or Leading Together to Achieve as One, facilitated by Defence Force Recruiting.

In Making Positive Change, students considered what the characteristics of a positive and negative relationship look like. This not only challenged their misconceptions, but provided a new framework to shape ideas of what acceptable behaviour in a relationship really is. Students also discussed techniques to ensure their voiced were heard, and developed confidence to make the right decisions for themselves, ensuring others did not speak on their behalf or cloud their judgment. Finally, the workshop introduced the concept of the ‘Bystander Effect’ and discussed strategies to overcome this effect by being an ‘active bystander’. 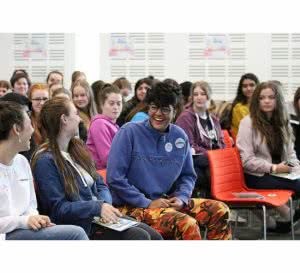 In Leading Together to Achieve as One, students were challenged to define their ideas of leadership, and consider what makes a great leader. Through group activities, students discovered that, “the leader doesn’t make the group, the group makes the leader” and leadership itself takes many forms. “Some leaders are born, some are made, and many of them are people who are good at directing people, and gaining the respect of others.” Students also discussed the qualities that make a good leader, and reflected on which qualities they would like to internalise, including the ability to be a great confidant and advocate for others.

After a short morning tea break, students returned to hear from the first keynote, Hani Abdile. Hani’s story was inspiring, funny, frightening, and had all students engaged and nodding throughout. Hani’s discussed her journey from Somalia, starting as “a nomad girl growing up amongst the camels in the sand”, to her journey to Ethiopia, which was vetoed by a kind woman on the bus ride who convinced Hani to travel to Kenya instead. 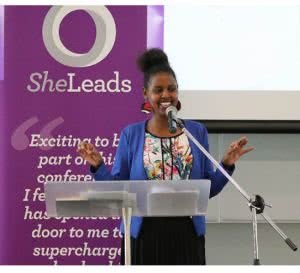 Hani discussed the power of sisterhood, saying that the woman on the bus changed her life, and protected her. She urged all attendees to always seek out other women and offer to help them, no matter what the circumstances. She concluded by saying “If you have ideas about how you’re going to change the world, write them down, share them with friends, and work hard to make things happen. There’s no point in just holding onto all these great thoughts in your head!”

Following Hani’s incredible story, students were treated to a panel discussion, including Hannah Gissane, Laura Piscopo, and FLTLT Esther Suh. The panel focused on being a trailblazer, and although the three women come from radically different backgrounds, they all shared one thing in common: always saying yes to opportunities.

Hannah talked about how she “retired from politics at 23”, after “accidentally” being elected to represent her local council at 19. “It all happened because I put my hat in the ring and gave it a go, and in that way, I consider myself a trailblazer”. Hannah also talked about the need to join lots of different groups to be involved in your community on a grass roots level. Hannah encouraged the students to challenge themselves and put themselves forward more, because “you never know when you will be the next 19-year-old councillor.” 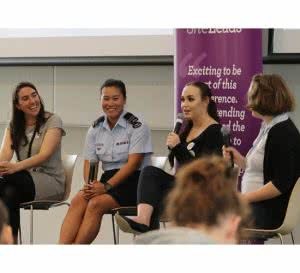 Laura talked about her own experience with disability and being a young carer, and talked passionately about the need for the education system to change. Laura said that when she was caring for her mother, “I really could of used someone else caring for me, but there wasn’t anybody there. ”She then also experienced bullying and harassment at school, which ultimately led her to studying at CIT instead of university and perusing mathematics. However, Laura has since used this experience to tell other women with diverse needs how they can still pursue an education outside of the usual pathway and still be successful.

Esther Suh said she wasn’t sure what she wanted to do once she finished school, and eventually decided to join the military. Once she had joined, Esther saw opportunities to improve the defence force for other women considering a similar career, especially culturally and linguistically diverse women. Esther now uses her position within Defence Force Recruitment to provide women with unique leadership opportunities, and sees herself as a trailblazer.

Following the panel, students participated in the speed networking session, which involves eight incredible young women in the community discussing their leadership pathway. Students broke into small groups and spent 10 minutes with each young woman, and were exposed to career pathways that included robotics, academia, photography, the public service, social enterprises, law, nursing, and board directorship. 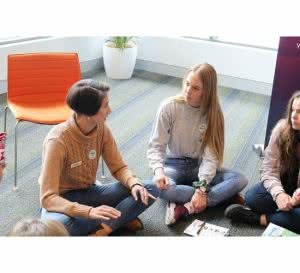 The eight young women included Engy Salah Abdelsalam, Tahlia-Rose Vanissum, Ashleigh Streeter, Lavanya Kala, Ashley St George, Tomasina Purcell, Joanna Richards, and Elizabeth Bowler. Of the experience, students raved about the new potential career pathways that had been opened to them, many of which they had never considered or realised could be “real jobs”.

Following lunch, students heard from our second keynote, Karlie Noon, a Kamilaroi woman in STEM. Karlie discussed her unconventional leadership journey, which started in a low-socioeconomic household with a “physically and intellectually disabled mother.”

Karlie struggled with school from an early age, and dropped out of high school before completing year 10. Luckily, she had had a tutor from year three, and excelled in math. This love of math spurred her on to enter university, which, while negatively received by her family, she pursued anyway. 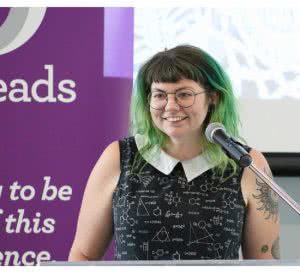 Karlie has since gone on to be the first Indigenous Australian in NSW to obtain a Bachelor of Mathematics, and Bachelor of Science. Karlie is currently undertaking a Masters of Astronomy and Astrophysics at the Australian National University and the CSIRO, and is merging dreaming with science to increase the status of First Nations knowledge within the Western scientific community. Karlie concluded by telling attendees to “follow your dream, even if your family and friends think you should do something different, even if you will be the first. Especially if you will be the first.”

In closing, Codie Bell reflected on the day, saying to the students she had “become totally inspired by these amazing women today – including you, the next generation of trailblazers!” Attendees then shared their own reflections, saying “from now on, I’m going to be an active bystander and help other women”, “I am so excited to have met so many other young women who think just like me”, “I’ve found my girl gang!”, and “I never thought I was a leader, because I’m shy, but I know that’s not a bad thing that will stop me from being great.” 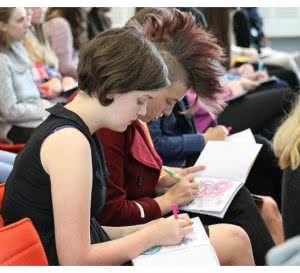 We are very grateful for our Principal Partner, Defence Force Recruiting, for making this event possible. We would also like to thank our other partners, including University of Canberra, Lush, National Council of Women ACT, and Prinstant.

Visit YWCA Canberra’s Flickr album to view all of the wonderful photos from the day.

Every day you can stay updated on the Clubhouse’s highlights by keeping an eye on our Facebook and Twitter pages. You can also read our blog and subscribe to the YWCA Canberra Clubhouse quarterly newsletter!