Ethical hacking at the Department of Human Services

Home News Ethical hacking at the Department of Human Services

Ethical hacking at the Department of Human Services

The YWCA Canberra Clubhouse is dedicated to facilitating learning opportunities for young people in the areas on science, technology, engineering, arts, and mathematics (STEAM). The Clubhouse strives to expose young people to the full breadth of STEAM, so every now and then we take members to visit other organisations that work in the STEAM industries.

On Wednesday 27 June, Clubhouse members visited the Innovation Centre  and the Cyber Security Branch at the Department of Human Services (DHS).  The tour started in the Innovation Centre and members were introduced to face recognition software. This software can determine roughly what your age, gender, and emotion is, from looking at your face. Members played some emotion recognition games and even saw what dog their face would be paired to. 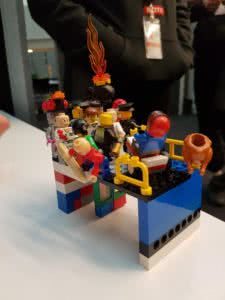 The members were then given a Lego challenge and tasked to break into two teams to build one half of a bridge each. The challenge was that the teams couldn’t see each other’s creation, but they could communicate with one another  verbally. It was great to see how members took a leadership role to determine how many blocks deep, high, and across the bridge would be. The members were very creative in adding character to their bridges and how they would connect the two sides to make it functional.

Members then met ‘Nadia’. Nadia is a virtual artificial intelligence customer service assistant. The ‘Nadia Project ’ aims to help people navigate the National Disability Insurance Scheme (NDIS). Members tested Nadia’s knowledge by asking, and typing questions to her. They learnt about how she was voiced, how the creators decided what she would look like, and how the system is able to interact seamlessly with the Australian Community. The next activity that members played with was virtual reality using the Oculus Rift. Members had a great time learning how to use the controls and engage with other users in Facebook Spaces. 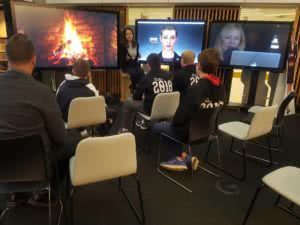 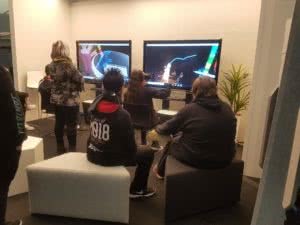 The second part of the tour was to learn about how the DHS keeps Australians’ information and money safe in their Cyber Security Branch. Members were privileged to visit the conference room which is a heavily restricted area. In the conference room, members were awed when they saw the fogged glass suddenly become clear to uncover a NASA like room full of television screens. Members learned about how people are employed to follow the news, their network activity, and phishing emails to detect and monitor possible or real threats to their systems. Staff also practice ethical hacking and test the DHS systems to detect and manage any possible weaknesses. DHS also have dedicated rooms and staff to respond to these incidents. 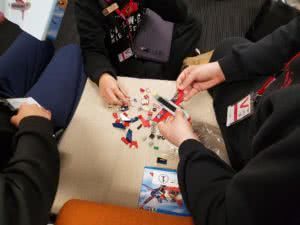 To test their communication and collaborative skills, the members were tasked to build a small Lego plane. The challenge was that only one member could see and explain the instructions while the other built it. They then had to swap roles every 10 turns. The members had an interesting time learning how to best explain and give directions that were easy to understand and follow. The annual Cyber Wars were coming up and members saw the giant Lego city that had been made with automated systems as to control the prison gates, traffic lights, train tracks etc. In the Cyber Wars, people work in teams to either defend these systems, or try to break into these systems to wreak havoc!

The Clubhouse members reported being more interested in pursuing a career in cyber security and now that they have made a connection with DHS, members can get Clubhouse support to complete their work experience there. After being introduced to virtual reality, members are interested in participating in the Clubhouse’s virtual reality program ‘What’s Your Reality’  next term.  The Clubhouse will continue to organise excursions that introduce Clubhouse members to careers in STEAM and the variety of roles one can have in a career in STEAM. The Clubhouse is dedicated to providing young people with the skills knowledge, and insight to ignite their passion for STEAM!

You can stay updated on all our highlights by keeping an eye on our Facebook and Twitter pages. You can also read our blog and subscribe to the YWCA Canberra Clubhouse quarterly newsletter.